Maintaining the Belts in Your Car – and a Little Denver History 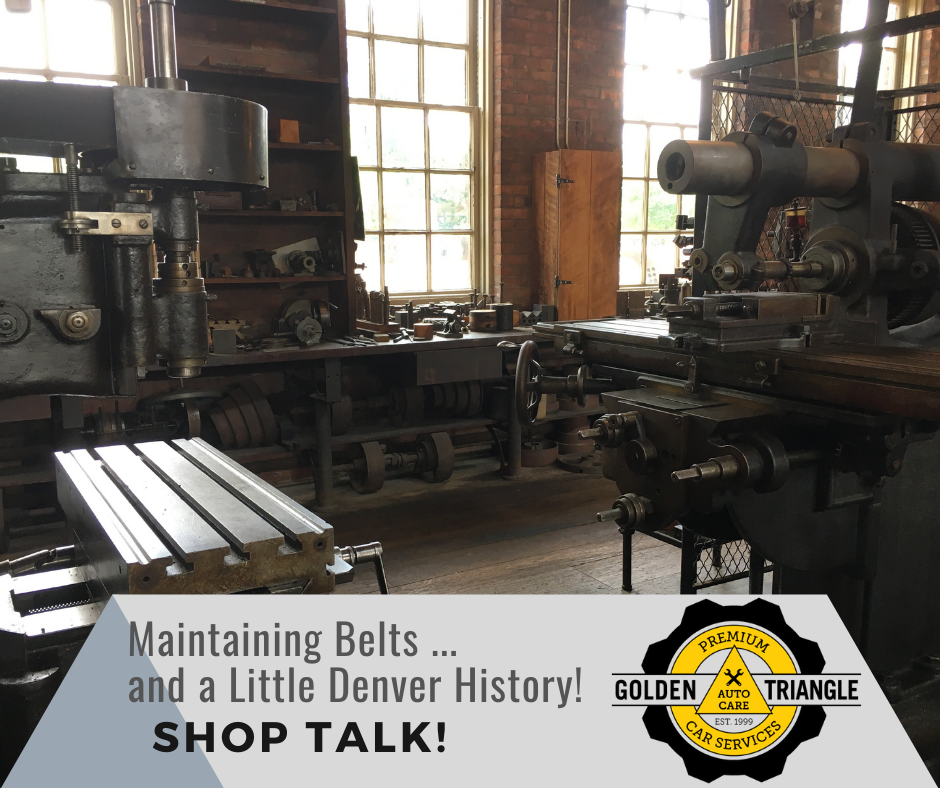 Early Days
In the early days of the automobile, engines were simple. Their only real function was to provide power to the wheels which pushed the car forward. There were no belts on the front of the engine.  Why? Because there were no additional components that needed to be powered. Alternators, power steering, air conditioners and other components were all added later as the automobile evolved.

When Belts Appeared
As these advanced engine components began to appear on engines, drive belts made of hemp, cotton, leather, were used to share power from the turning engine. Belts made from these natural materials were sufficient in turning the various pulleys in the engine. Only problem was: they were prone to stretching and breaking.

Evolution of Belts
In 1911 Charles Gates Sr. purchased Denver based Colorado Tire and Leather Company. The manufacturer produced a steel-studded leather belt which motorists put on their car tires to extend the life of the tire. By 1917 the company was phasing out the use of leather for a more durable product: rubber.

As Charles Gates transitioned the manufacturing to rubber, his brother, John, developed a rubber belt that would replace the rope and leather belts on car engines. They called it a V Belt based on its “V” shape.  It would later become the model for the serpentine belt – widely used on today’s vehicles.

Gates Rubber Company
The small company’s success skyrocketed with the new belt and the company quickly grew. In 1919 the Colorado Tire and Leather Company would be renamed the Gates Rubber Company and would go on to be the largest producer of V-Belts in the world.

Not far from the original Gates Rubber facility you’ll find Golden Triangle Auto Care.  Their expert mechanics check and replace drive belts for Denver car owners when needed. Today’s drive belts can last 50,000 to 100,000 miles before needing to be replaced.

Maintenance Signals
A sure sign of a broken belt is the sudden loss of power steering, the air conditioner stops working or the electrical power in the car begins to fade. Don’t wait to get your car into Golden Triangle Auto Care when these signs occur.  Call us right away and we’ll get you scheduled at 303-573-1335.

With Golden Triangle Auto Care’s 30 Point Vehicle Health Evaluation, belts are checked for wear every time your car comes into the shop. If your belts are making noise or squealing, come in today to have them inspected and if needed, replaced.